The welcoming entrance of Tehran certainly is Azadi square and its upland tower. This 148 ft tower once named gate of Cyrus to project power and hospitality of Tehran- the capital of Iran. The main arch of this tower is the representative of Sassanian dynasty and the vault of Taghe-kasra. And initially there are two bases and gradually it ascends and goes uppers to represent the growth of Tehran and Iran as a nation. This monument has more to offer since there are museums beneath and on the top of this tower. 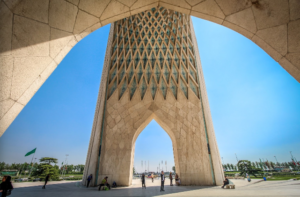 Azadi routes and location on the map

Azadi square is in the 10th district of Tehran. From east it goes to Karaj highway and from west it starts with Azadi street and goes to Yadegar Imam  highway. To north it directly connects to Jenah express way and later Ashrafi Esfahani street. In it’s south side there are multiple routes. to name a couple and those are Hojjaj street and saidi expressway.

As you can predict due to high density of car passages, the weather doesn’t have top quality. But this doesn’t imply that you shouldn’t visit this historical site at all! In fact, on the contrary Azadi district is filled with green spaces. The tower itself is surrounded with a massive urban park so that visitors can have the maximum joy from Azadi area.

It is fully just to say that from any point in Tehran or even other parts of Iran you can easily reach to Azadi square as there are various types of public transportation.

Luxury districts in Shiraz: The Finest Places For Short or Long Term Residency

Perhaps you have a plan to travel to shiraz or maybe you want to buy a property or rent a new flat in an exquisite district of Shiraz, or maybe you aim to find a...
Read more

Close to 10.000 permanent residents, Bagh-e Saba was once a county side for the Qajar Royalties. Today this crowded zone of Tehran is in the 7th district and very close to the main lines of...
Read more

This district is the chief market of the valve and faucets in Tehran. Therefore, it has a commercial functionality rather than residential practicality. Banihashem is in the district 3 and 4 of Tehran. The urban...
Read more

The name of the district came from the famous village in the central Europe in  France called Neauphle-le-Château It is in the district 12 of tehran. Prior to that this street was called France.  Today...
Read more